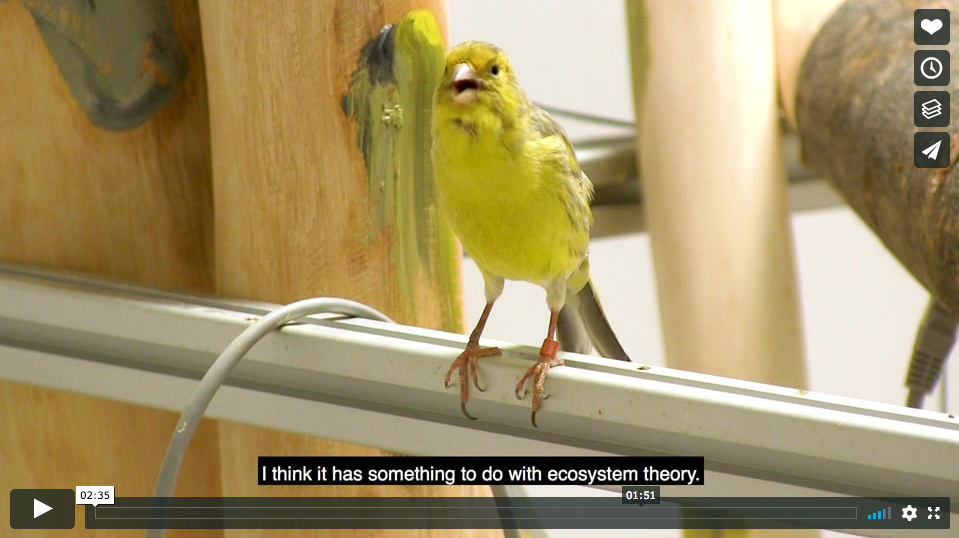 Environtech is not simply an installation that incorporates technological elements to others more of a natural or animal character or, at least, in summary, related to fauna and flora. The proposal could rather be defined as an attempt to question the limits that separate the spheres of culture and nature, through the production of an environment that expands the notions of technique and technology to other forms of non-human life.Starting from a frame of metal profiles that formally comes from the drawing of architectures dedicated to data traffic, such as, for instance, the servers from which information is distributed, Environtech is laid out as a biotope or a naturcultural environment - according to the terminology used by Donna Haraway - to account for the interspecies communications that occur beyond our language. The installation, in that sense, depicts the possible coexistence between certain organisms, bringing together that which is animal, vegetal, human and their artificial constructions. In a non-mediated coexistence, which thinks life from a random perspective, beyond the properly human and its epistemology, opening itself to ontologies derived from biology towards other coexistence and existence that erase the separation between species and natural kingdoms.

In this way, the elements of the technical universe are not only juxtaposed to a set of wood treated in a pictorial-sculptural way, which also simulate a type of industrial and pre-technological layout and functioning, that is, prior to the electricity; but they are associated and co-ally, creating a habitable display that mixes spaces and their attributes, where nature is claimed as our only culture and culture as the only possible nature.About the work process, it is important to point out how the trunks used in the installation are collected in collaboration with the public services of the environment, always choosing between local species, although not native ones. In fact, the whole project seems, in the background, to challenge that idea of the autochthonous and the identity that has capitalized our way of understanding the human and its activities. Since it superimposes different layers of life forms, at the same time it forces a kind of coexistence where the reality of existence becomes mutant and diversifies.

Although it is not about falling into the arms of cybernetic paradigms, which simplify and try to make existence a predictable phenomenon. Environtech behaves, on the other hand, as a form of entropic environment, with an even absurd impression, in which the performative simply occurs independently of any mechanical or theatrical notion. That is, as a place where materials and the different behaviors of things happen, even when supposedly nothing is happening. Faced with the environmental crisis and the challenges arising from the consumption and exploitation of resources in the times of the Anthropocene, Environtech explores different forms of communication and agency, more horizontal.